Rodgers and Hammerstein’s 2013 rendition of Cinderella attempts to revamp the classic tale into a relatable story in today’s society. Similar to the original production, Cinderella follows a young girl who lives with her stepmother and stepsisters after her father’s passing. Being the odd one out of her family, she is ostracized and forced to work for her evil stepmother. They live in the royal town where the queen is determined to find the prince a wife to fulfill his happiness. This process entails throwing a grand ball, inviting all the women in the town in hopes that the prince can find the one. Cinderella’s stepmother, evil as evil can be, does not allow her to attend, but rather only allows her two other daughters to attend. However, Cinderella’s fairy godmother swoops in to save the day, dressing her with a gown and glass slippers. The prince falls in love with her in time for the clock to strike twelve. Cinderella eagerly leaves, forgetting her glass slipper at the castle which the prince utilizes to find her. And… they lived happily ever after. By casting a woman of color as Cinderella and incorporating a diverse cast, the musical production goes beyond the basics of race and ethnicity.

As we watched Rodgers and Hammerstein’s Cinderella, we collectively noticed various elements of the musical that represented race and ethnicity.

EB: What were your expectations coming into this production?

MG: Coming into the musical, I was expecting to see a dominantly white cast – the classic Cinderella story I grew up knowing. To my surprise, Cinderella, as well as important characters such as the queen, were also people of color. Each race had equally important and small roles within the society.

AD: For me personally, I came into the musical knowing that Rodgers and Hammerstein’s version of Cinderella featured a black female as the lead role.  This actually drew me in since there have been so many renditions of Cinderella, yet there historically had not been a version where the person cast to play Cinderella was black.  Other than that, I expected this version to be pretty similar to most others.

MG: From this Cinderella edition, what were a few takeaways you noticed?

EB: I noticed how diverse the cast of the musical was, so that made me think that was a priority for Disney while making this production. The prince’s nationality is Fillipino while Cinderella is African American. In addition to this, the prince’s mother is African American while his father is white, therefore allowing a multitude of races to be seen and represented. I thoroughly enjoyed this and found that I loved seeing the normalcy in which diverse people were cast into roles. It is refreshing seeing historically white roles given to people of color and not focusing on forcing people into roles simply because of the color of their skin.

AD: I also noticed how diverse the cast was. In the opening number “The Sweetest Sounds,” we are shown the town bustling with people.  These people come from all different backgrounds and ethnicities and I could not find one race that was dominant over the others.  In addition to this, all of these different races were portrayed as equal and there was not this stereotypical portrayal of any races which I found extremely refreshing.

AD: What was your reaction to most of the lead characters being people of color?

MG: I think it was extremely important to have a woman of color being the lead within a Disney movie. The target audience of most Disney movies are young children who look up to the lead characters. Having this character be the princess lead, it allows the young girls of any race to look up to her and accept all kinds of people. Additionally, this opens up the Disney toy industry for young girls who watch this musical. As an adolescent, most girls grow up playing with dolls and Barbies. It is crucial for girls of color to have dolls who look like them and feel like all the other girls.

EB: I loved the fact that most of the lead characters were played by people of color.  In the picture above is the royal family and as we can see, multiple races are depicted.  Being a person of color myself, the lack of diversity in popular culture sticks out dramatically to me, so this casting was a step in the right direction.  Also, a person’s skin color is not even remotely discussed or noticed throughout the movie. I cannot think of one scene where I felt that someone was being discriminated against for their skin color.

EB: What were your thoughts about Cinderella after watching it?

MG: Personally I liked how they took the original story of Cinderella and made it more modern. Incorporating the diverse cast definitely inferred this production came out more recent than other versions. Additionally, involving the talented African American singer Whitney Houston gave the musical more traction and I am more likely to watch again knowing a talented figure was Cinderella’s godmother. 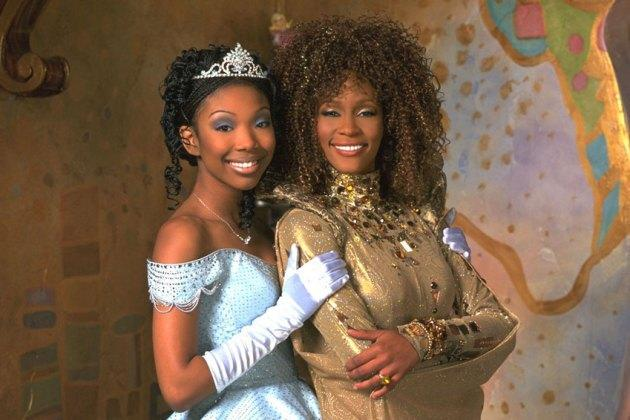 AD: After watching it, I found that I enjoyed the story of Cinderella more.  The inclusion of such a diverse cast brings a completely different look to the story.  I found it refreshing to see people of all races and ethnicities collectively getting along and co-existing peacefully. In a world where there has been so much hate and exclusion lately in regards to race and ethnicity, it was nice to be reminded that we can steer away from exclusion and veer towards inclusion.
In conclusion, the addition of such a diverse cast and a strong independent African American woman allows the discussion of race and ethnicity to be included in Rodgers and Hammerstein’s Cinderella. Due to the female lead and the queen of the royal family being African American, this sets an example for many young girls and allows them to look up to a character such as a princess. Furthermore, the use of a Filipino as the lead male character sets an example for young boys to grow up to be whoever they want. The positive audience reaction implies a need for a production like this in the musical industry and pushes for more films like this in the future.