Who is the target audience of The Sound of Music (1965)? – Is it women? Or specifically, the tomboys out there who can really relate to the protagonist Maria? Or maybe it’s just children who are interested in learning how to sing? Well, even if those little kindergarteners are not the main audience, this film—directed by ​​Robert Wise, starring Julie Andrews, and including music written by the prominent duo Richard Rodgers and Oscar Hammerstein—certainly is the textbook for all primary school music classes with its renowned musical number, “Do-Re-Mi.”

At a first glance, the audience could interpret The Sound of Music as a film that relays the story of a woman who doesn’t quite fit the standards of a “proper lady” and how this characteristic of hers becomes a great charm. The appearance of Maria plays an important role in setting up the tomboy of the character: her short hair, ugly dress, and makeup-less face. 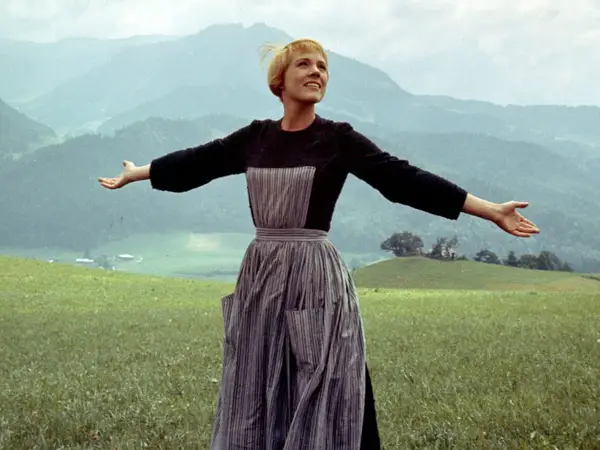 Unlike the typical long and voluminous hair, colorful and classy dresses, and sparkly makeup that women wore to appeal to men, Maria maintains a short cut hairstyle, a bland dress—which everyone in Captain von Trapp’s mansion brutally criticizes—and a bare face. These costume choices make it apparent that Maria is someone who prioritizes convenience over fashion.

Not only visually, but Maria’s attitude also excludes her from the group of “proper ladies.” She is exceptionally talkative, even in situations where women are expected to stay speechless; from her very first encounter with Captain von Trapp, Maria straight-up refuses to abide by the house rules of using a whistle to call the children. The film once more affirms her strong intuition to point out a flaw when she sees one when Captain returns home after he visits Vienna and disapproves of the children having fun on a boat ride with Maria. Even in the very moment of the Captain trying to fire her, Maria shoots words like they’re bullets about how the Captain is unnecessarily obsessed with keeping discipline and that his children deserve some playtime.

Furthermore, Rodgers and Hammerstein dedicate a whole musical number to other nuns talking crap about Maria.

The whimsical melody and the light high flutes playing staccato notes in the back well describe how the nuns view Maria. The lively mood of the song alleviates the problem of whether or not Maria should be kicked out of the abbey (which is what the song is actually about), which also matches Maria’s personality of making everything joyful. The lyrics add on by verbally describing Maria’s character; “She climbs a tree / And scrapes her knee / Her dress has got a tear” and “She’s always late for everything / Except for every meal” clearly illustrate how unorganized and out-of-standard Maria is. In the musical number, the nuns call Maria “A flibbertigibbet! / A will-o’-the-wisp! / A clown!” as well as “a cloud [you cannot] pin down”—which leads to my interpretation of Maria: a free spirit. Her attachment to freedom is frankly symbolized by the hill that appears three times throughout the film. It is the hill where Maria is first introduced; the hill to which Maria escapes from the strict rules of the abbey and where she can freely sing and dance and run around. She introduces this freedom to the children who she also loves dearly by bringing them on a field trip and teaching them how to sing and dance. The symbol is emphasized once again when the whole family crosses the hill to search for safety and freedom from the war. 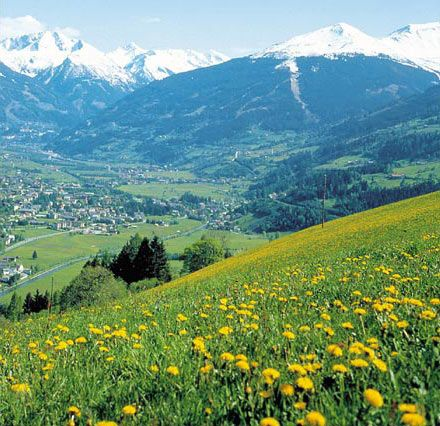 The director intentionally chooses a hill that is above and distant from the whole civilization, representing isolation and freedom from the world. This selective setting implies a detachment from not only society but its norms and stereotypes as well, which also aligns with Maria’s atypical character. However, when Maria is back amongst the people, her free spirit is considered “not woman-like” by both the abbey and Captain’s house.

The director further emphasizes Maria as a character who breaks the standard stereotypes of women when he introduces the baroness. The Baroness is a literal personification of all the typical qualities of a “proper lady”: perfectly set blonde silky hair, flattering dresses with lots of jewelry, and visible makeup. She is the epitome of beauty and elegance as shown through her style as well as her soothing voice and smile. 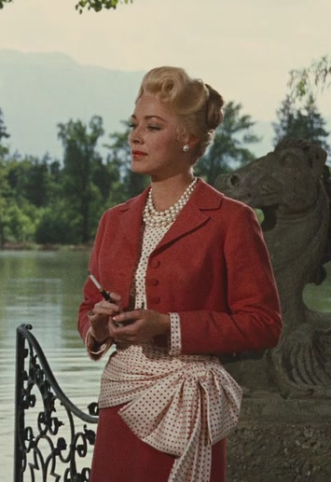 The two drastically different characters of the same gender highlight both personalities much more, and by resolving the film with Maria as the winner of Captain von Trapp’s love, the film transmits a message that even without being a typical woman, one can be loved by her innocent and enthusiastic personality.

However, after multiple re-watches, the flaws of this film stand out. Though Maria should be the symbol of a figure against the gender stereotypes of women, the character did not completely break the qualities, as she still had blonde hair (one of the biggest symbols of a pretty lady after the famous Gentlemen Prefer Blondes in 1953) and, though they were ugly, wore dresses only. These feminine characteristics of Maria prevent her from completely being ostracized by society. Also, Maria is essentially white, which allows her more freedom to be individualistic and rebellious against societal norms. If Maria was not white, but of a different race, her so-called “unique” aspects of her personality wouldn’t stop at only being called weird, but would most likely lead to her losing her job and having no hope of being loved by a wealthy man. These loopholes in detail weaken the film’s argument that it is okay not to follow societal expectations.

Additionally, Maria is still a “female” in her heart, as her strongest quality is innocence. Wise well-emphasizes her innocence throughout the whole film through her love for singing, dancing, and playing. Particularly in the musical number, “Favorite Things,” Maria uses a somewhat childish method of avoiding the storm by listing things that make her happy: “Cream-colored ponies and crisp apple strudels / Doorbells and sleigh bells and schnitzel with noodles / Wild geese that fly with the moon on their wings / These are a few of my favorite things,” “When I’m feeling sad / I simply remember my favorite things / And then I don’t feel so bad.” Not only in this song, but almost as soon as they meet, Maria empathizes well with the children and wins their hearts, proving that she shares commonalities with the young mind.

The societal expectation that the purpose of women is to find a wealthy man, create a family, and take care of children remains as well. When Maria returns to the abbey after realizing that she loves Captain von Trapp, Mother Abbess sends her back to the house with the mission of “living the life that [she was] born to live,” or in more explicit words, pursuing her love and supporting a family as a motherly figure. As Maria ends up being the actual mother of the von Trapp family, it makes the audience question: do all women, despite how unladylike they are, end up being a mother?

Wise also leaves some questionable scenes regarding gender stereotypes involving other characters as well. First and foremost, Captain von Trapp is also the epitome of a “manly” man by being shy of emotions, not knowing how to handle kids, being unnecessarily strict, etc. It may have been intentional for the story to only focus on female gender stereotypes, but we cannot ignore the fact that males are also restrained from gender stereotypes.

Also, in the well-known “Sixteen Going on Seventeen,” Rolfe attempts to teach Liesl about the world, despite him only being a year older. He promises to protect and guide her like a reliable man; “You need someone older and wiser / Telling you what to do / I am seventeen going on eighteen / I’ll take care of you” (but he’s only 17!). By assigning a note to each syllable, Rodgers lengthens the song to allow the actor to enunciate each word. Also, his facial expressions and straight posture make the audience wonder if he’s talking to a kindergartener. Rolfe also sets a great example of what men expect of women: “Totally unprepared are you / To face a world of men / Timid and shy and scared are you / Of things beyond your ken”—again, touching on societal expectations towards females.

Though The Sound of Music attempts to encourage the elimination of gender stereotypes, especially regarding women, it lacks full coverage. This could be due to the period in which this film was produced: 1965—when people just started noticing racial discrimination and didn’t even touch on sexual stereotypes yet. Nevertheless, this film still stands as an impactful attempt to mitigate the standards that women had to live up to. The film is especially relevant to the current world, where women are still fighting to break free from gender stereotypes; artists of many genres constantly try to popularize the atypical image of women. Recently, South Korea has been facing this change in its main music industry. The K-pop girl group, ()I-DLE (formerly known as (G)I-DLE), earns great fame and praise for one of their recent songs, “Tomboy,” by speaking about being called a tomboy for behaving outside of the societal norms for a “girl.” The lyrics trigger gender expectations by tolerating exes “Tattoo my ex’s name,” swearing “Yeah I’m fxxking tomboy,” and enjoying sex and drinking “I like to sex on drinking whiskey.” By publicly targeting the ubiquitous opinion that women are supposed to be pure and submissive, ()I-DLE states that it is absurd for women to be called a “tomboy” just by doing some socially stigmatized actions (that ironically men can do). Also, by removing the “G” from their name, which represented “Girl,” ()I-DLE supports non-binary gender identities and calls off the stereotypes that define a certain gender. Along with great fame, this song received much attention for its message, especially in the middle of a very conservative country.

Similarly, considering how conservative the world must have been when this film was released, the audience should acclaim this film for being bold and pointing out a big flaw in society, just like Maria did when she saw one.