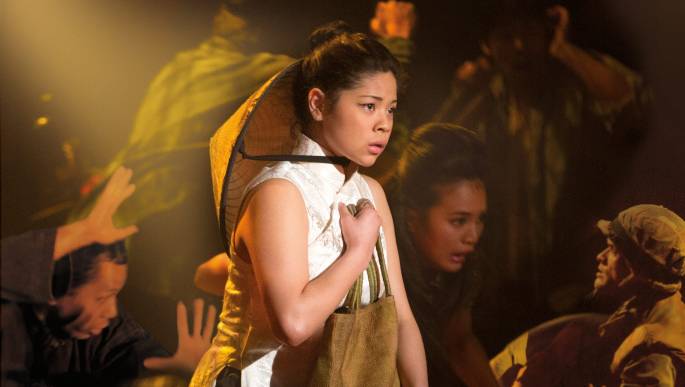 On March 16, 2021, eight people―six of whom were Asian women―were killed in spa shootings outside of Atlanta by Robert Aaron Long, a 21 year old white man. At the current time, Long has been charged with eight counts of murder, but has not been charged with a hate crime. For Sung Yeon Choimorrow, executive director of the National Asian Pacific American Women’s Forum, the absence of a hate crime charge is unacceptable due to the nature of Long’s shooting spree as “racially motivated sexual violence against women.” Choimorrow, who spoke in an interview with ABC, went on to say, “The reason they died wasn’t just because they were women, even though that’s what the killer says it is. They were murdered because they were Asian American women. You cannot separate that.”

You might be thinking, Brooke, this is a musical theatre course, why are you talking about this?

Well, you’re right. This is a musical theatre course, but it does not exist in a vacuum. Or, at least, it wasn’t designed to. While there has been an egregious amount of racially motivated violence over the past year, I bring up this attack, specifically, because we cannot ignore its implications on the material of this class. In On Trust, I urged you to trust me and to invest deeply in this course as a journey of cultural exploration and personal growth. Now is the time to dig into that space.

In the fall of 2020, when I was taking this course, I watched Miss Saigon for the first time and I was an absolute mess. I was wrecked by Kim’s story and I thought my weeping was an expression of unselfish empathy. But as I sat down to write my analysis essay about Miss Saigon, I became increasingly convicted that my “empathy” was, in fact, not unselfish, and really, it wasn’t empathy at all.

In my post, I Am Chris: An Exploration of (white) Empathy, I include a quote from the brilliant Brené Brown, a New York Times bestselling author and research professor at the University of Houston who studies empathy, vulnerability, and shame. She says,

“Expressing empathy or being empathetic is not easy. It requires us to be able to see the world as others see it, to be non-judgmental, to understand another person’s feelings and to communicate your understanding of that person’s feelings. … Empathy is a choice. And it’s a vulnerabile choice. Because in order to connect with you I have to connect with something in myself that knows that feeling.”

My post tracks my own journey of discovery through the territory of empathy, and I bring my reader with me. I encourage you to read the full post, but the heart of my argument is this:

In many ways, I am Chris. I am the character I hate because it is my whiteness that begs me to express empathy toward Kim. In selfish catharsis, I cry for her.

My failure to truly be empathetic, then, holds a much higher cost for Kim [in Miss Saigon] than it does Fanny [in Funny Girl]. Where my “empathy” is higher, I am being asked more of myself. So when my tears dry and my life returns to normal, I’ve done a greater disservice to myself and others by failing to act. At this point, you might be expecting me to wrap all of this up in a nice little bow. I’m sorry to disappoint you, but I can’t do that. I don’t have an answer to this. I think radical empathy begins with acknowledging that you’re not there yet. I’ve done that part. But what next? I haven’t come up with a way to fulfill the last step of empathy—to put forth genuine effort to act upon that which I feel sadness. But for now, maybe Miss Saigon isn’t asking me to do that. For now, I think I just need to sit in this development. For now, I think I need to study the ways that I am Chris.

The reality is, until the recent shootings outside of Atlanta, I hadn’t thought much about the ways I am Chris. Not because I didn’t care, but because I didn’t know how to function out of this space between stagnation and growth. For me, Miss Saigon was the beginning of an exploration into my own shortcomings in the practice of empathy. And, while I have certainly not “arrived” at a conclusion or a way to continue on my journey, the March shootings have certainly pushed me to bring a renewed energy to this journey.

So what are the implications of the recent shootings on our course, and on us? We return to the words of Choimorrow who identifies the “harmful stereotypes that objectify and depict Asian women as what she described as ‘hypersexualized,’ ‘meek’ and ‘submissive.’” In the same ABC article Choimorrow is quoted in, it says, “Some argue the United States’ military presence in the Asia Pacific also played a role in stigmatizing Asians when American soldiers went abroad during World War II, the Korean War, the Vietnam War and the Philippine-American War.” As students in this class, we have an acute knowledge that this is true. We see the blatant objectification of Kim and the other Vietnamese women in Miss Saigon, and we can recognize that there is a potential for harm if Miss Saigon and other similar media representations of Asian women are not properly unpacked. We have to name these representations as what they are: representations. And we have to consider what they are asking of us.

For me, I don’t know what it looks like to really be empathetic at this moment, but I think Miss Saigon and the recent events have asked me to stay the course of this journey. I cannot run from the discomfort of not knowing what move to make next. I just have to press on searching. I encourage you to do the same.